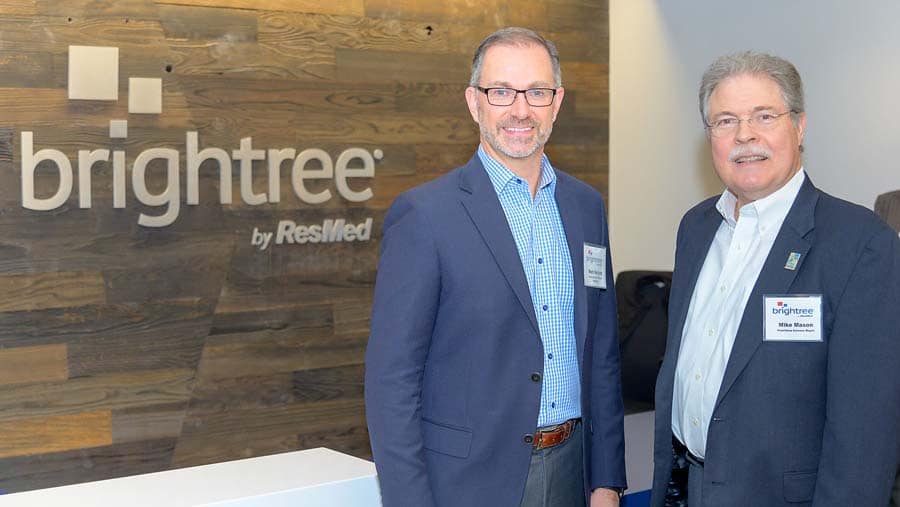 “When considering a new location for our headquarters, we were won over by the vibrant technology community of Peachtree Corners,” said Matt Mellott, CEO of Brightree. “The recently opened Curiosity Lab, in particular, has generated a powerful synergy that speaks to the collaborative values of the companies and people here. We are thrilled to be part of the Peachtree Corners business community and believe this will play a significant role in our next chapter of growth and innovation.”

The newly opened Curiosity Lab at Peachtree Corners, an autonomous vehicle and smart-city laboratory, was created as an economic development initiative and designed to further develop Technology Park Atlanta into a technology-focused hub.

“The decision to build Curiosity Lab is already paying dividends,” said City Manager Brian Johnson. “Brightree’s choice to be near Curiosity Lab further confirms that the city’s efforts in creating this living laboratory has been successful.

“Curiosity Lab has already had an impact by attracting a company that brought 160 new jobs to our city. Another company, ASHRA, will bring over 120 jobs when it relocates in the fall. ASHRAE’s decision to move into Technology Park was also influenced by Curiosity Lab. We are expecting more business to follow suit,’ said Johnson.

The city’s newest initiative, Curiosity Lab is part of the efforts to re-imagine Technology Park Atlanta into an innovation hub that incorporates collaborative spaces, multi-use trails, startup and accelerator incubators, nearby housing opportunities for the millennial-age workforce, pocket parks and other community gathering spaces.

“We are happy to welcome Brightree,” said Mayor Mason during the ribbon-cutting event at which over 200 attended. “Technology Park Atlanta has become a thriving center that attracts technology-based businesses. Brightree’s relocation here is further proof that Technology Park is becoming the innovative hub we imagined just five years ago.”

Brightree’s grand opening capped off a year that has brought in a number of new businesses that have purchased or leased space in Peachtree Corners’ 500-acre Technology Park Atlanta.

The opening and ribbon cutting was held last week with messages from CEO Matt Mellott and city Mayor Mike Mason, followed by a tour of the facility. 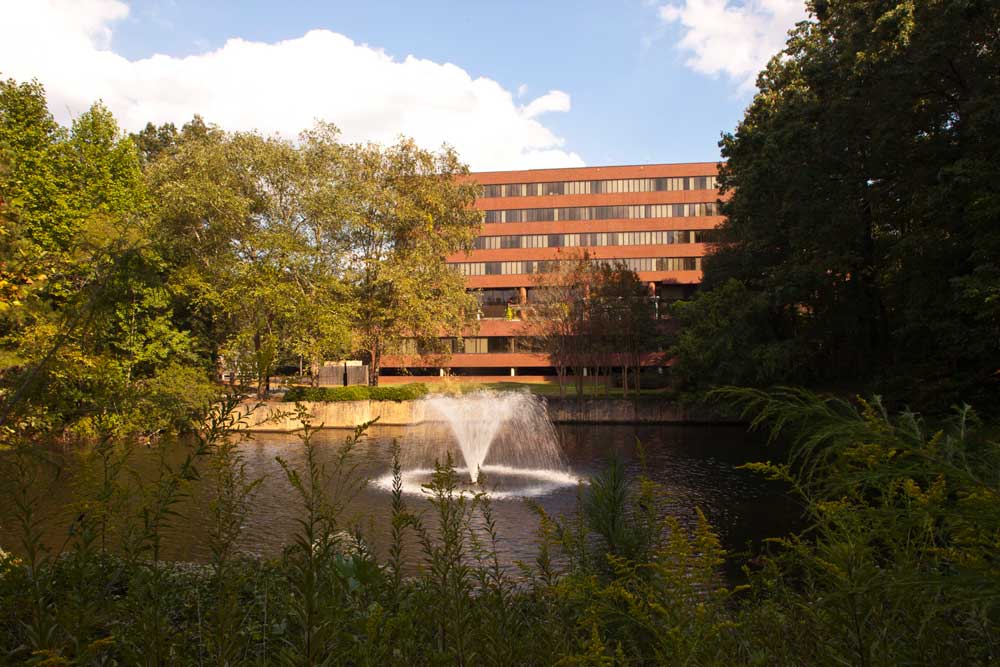 “In 2019, we worked with ownership to complete renovations to the lobby, corridors and elevators, and add a new conference center and fitness facility with lockers and showers to the property’s already stellar amenity offerings,” said Roach. “These enhancements, as well as the building’s overall flexibility, have been extremely well received by prospects and tenants.”

Additional amenities at the property include a 10,000-square-foot, fully furnished patio overlooking basketball and volleyball courts, and covered parking for more than 50% of vehicles.

Summit at Peachtree Parkway is located minutes from Interstate 285, providing easy access to Buckhead, Midtown and downtown Atlanta. Adjacent to the future Peachtree Corners Technology Park Trail, the property is within 10 miles of more than 10 golf courses and country clubs, and less than a mile from the new 21-acre Peachtree Corners Town Center. 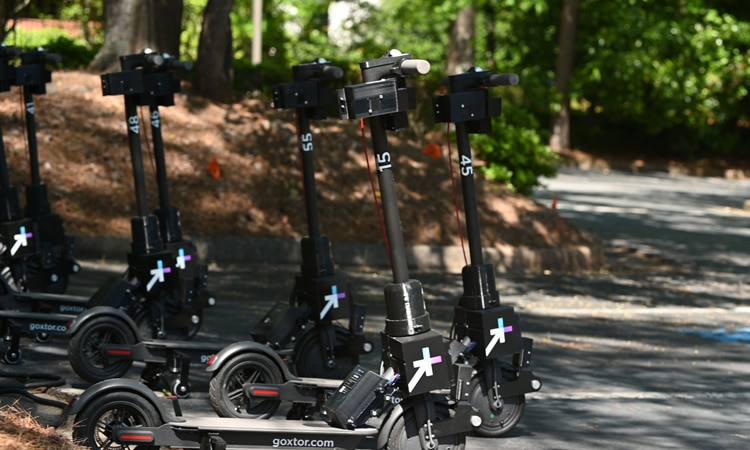 In keeping with its long history of developing cutting-edge technologies, the city of Peachtree Corners announced the launch of a fleet of the world’s first teleoperated e-scooter to operate on public streets The e-scooters made their debut this week.

The city welcomed the opportunity to work with Tortoise and Go X, which combined forces to offer an e-scooter that has the ability, through the use of remote tele-operators, to reposition itself back to a safe parking spot – or to respond to a call (using the company’s app) for an e-scooter to be delivered right to a customer’s door. The e-scooters are repositioned by Tortoise’s remote teleoperators.

Peachtree Corners has been working with the two visionary companies to revolutionize e-scooter mobility for use in its city. The new technology solves two issues that have plagued the industry: 1) Finding a scooter – and 2) Returning scooters to a home base for safe parking, charging and cleaning.

The e-scooters make their debut in the city’s Technology Park Atlanta, a 500-acre existing technology park that is home to over 7,000 employees. The teleoperated e-scooters will be available for use by the general public and will operate on the city’s new 1.5-mile autonomous vehicle test track that runs alongside lanes used by the motoring public.

“We are excited to showcase this innovative technology,” said Mayor Mike Mason. “It’s another opportunity for the city to look beyond traditional transportation and seek innovative ways to improve mobility. We invite our citizens and the business community to see and experience this new technology.”

The initial pilot will run for six months and marks the first time ever that teleoperated e-scooters are deployed on public streets.

This is not the first time that the city has been the site of innovative transportation technologies. Last fall, Olli, the self-driving shuttle designed and built by Local Motors, began operating along the city’s 1.5-mile autonomous vehicle track. The test track is part of Curiosity Lab, the city’s living lab, which offers companies a facility to test emerging technologies in a real-world environment.

This latest venture into teleoperated e-scooters is part of the city’s drive to further expand its “smart city” technologies.

“An important goal for us was to ensure that residents can enjoy the convenience of using e-scooters, right here in Peachtree Corners,” said City Manager Brian Johnson. “As a reflection of our commitment to making cities smarter, we didn’t hesitate to partner with Tortoise to launch the first-ever fleet of self-driving e-scooters for public use. We are extremely pleased to be a partner in this innovative and world-changing technology.”

Thompson Ehle to Move to New Offices at 2 Sun Court 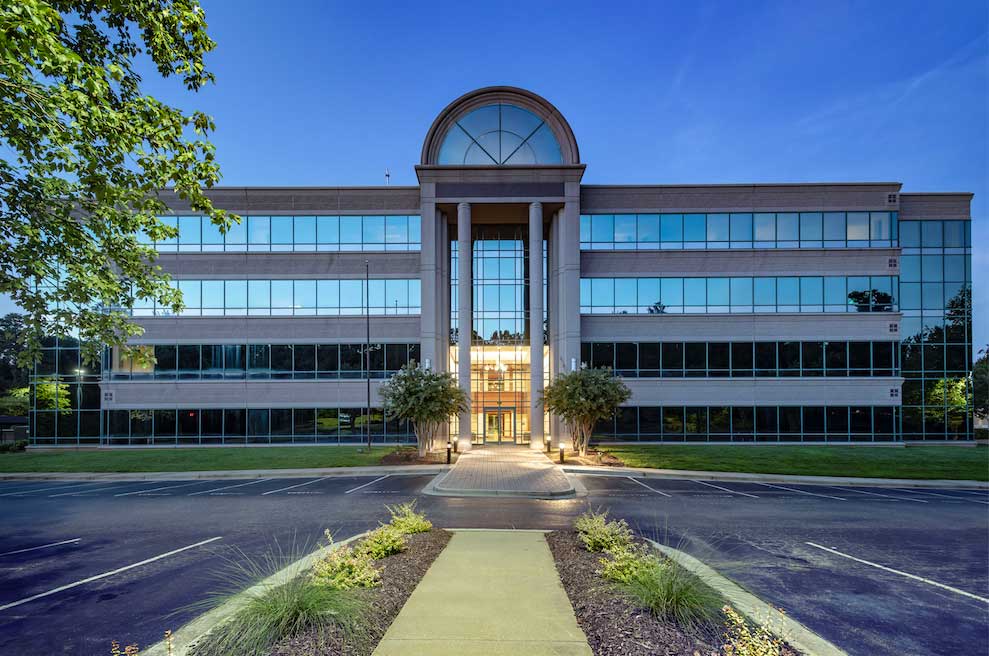 Thompson Ehle Company is a provider of construction management, fire protection, mechanical and electrical engineering services with offices in Atlanta, Ga. and Houston, Texas. Later this year, the company will take occupancy, relocating from its current Peachtree Corner’s office at 50 Technology Parkway.

“We are continuing to see ongoing interest in the Peachtree Corners submarket from a number of top-tier tenants,” said Lincoln’s Davis. “With best-in-class amenities, Redline is committed to offering an exceptional office experience at great value for tenants of 2 Sun and we are pleased that Thompson Ehle has chosen to relocate to the building.”

“We tailored our renovation of 2 Sun to meet the needs of today’s tenants in our quest to deliver an improved property that provides exceptional experience at great value,” said Andrew Webb, principal of Redline. “We are honored to be adding Thompson Ehle to the building’s existing group of high quality tenants.”