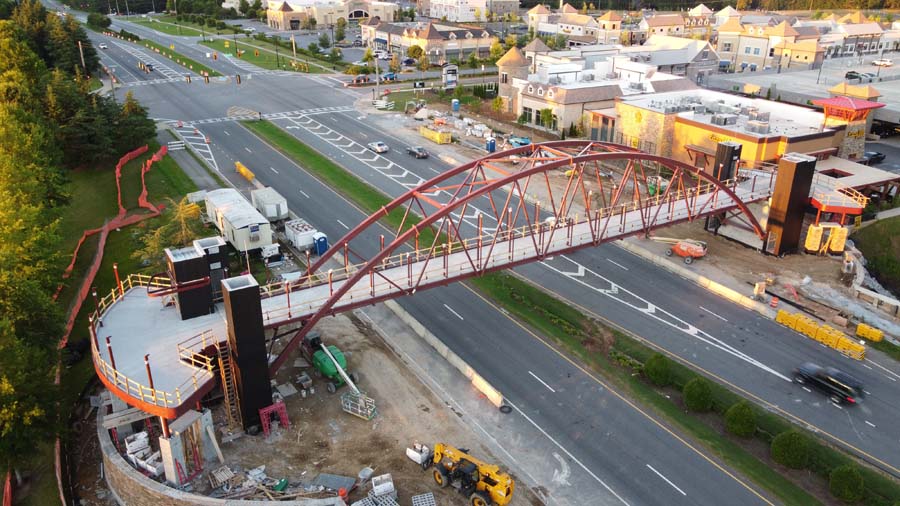 This is a photo gallery of images take via drone by Peter Chen. Included are images from Peachtree Corners Town Center.

Pen Pals in Quarantine: How a Peachtree Corners family and an Australian family connected worlds apart 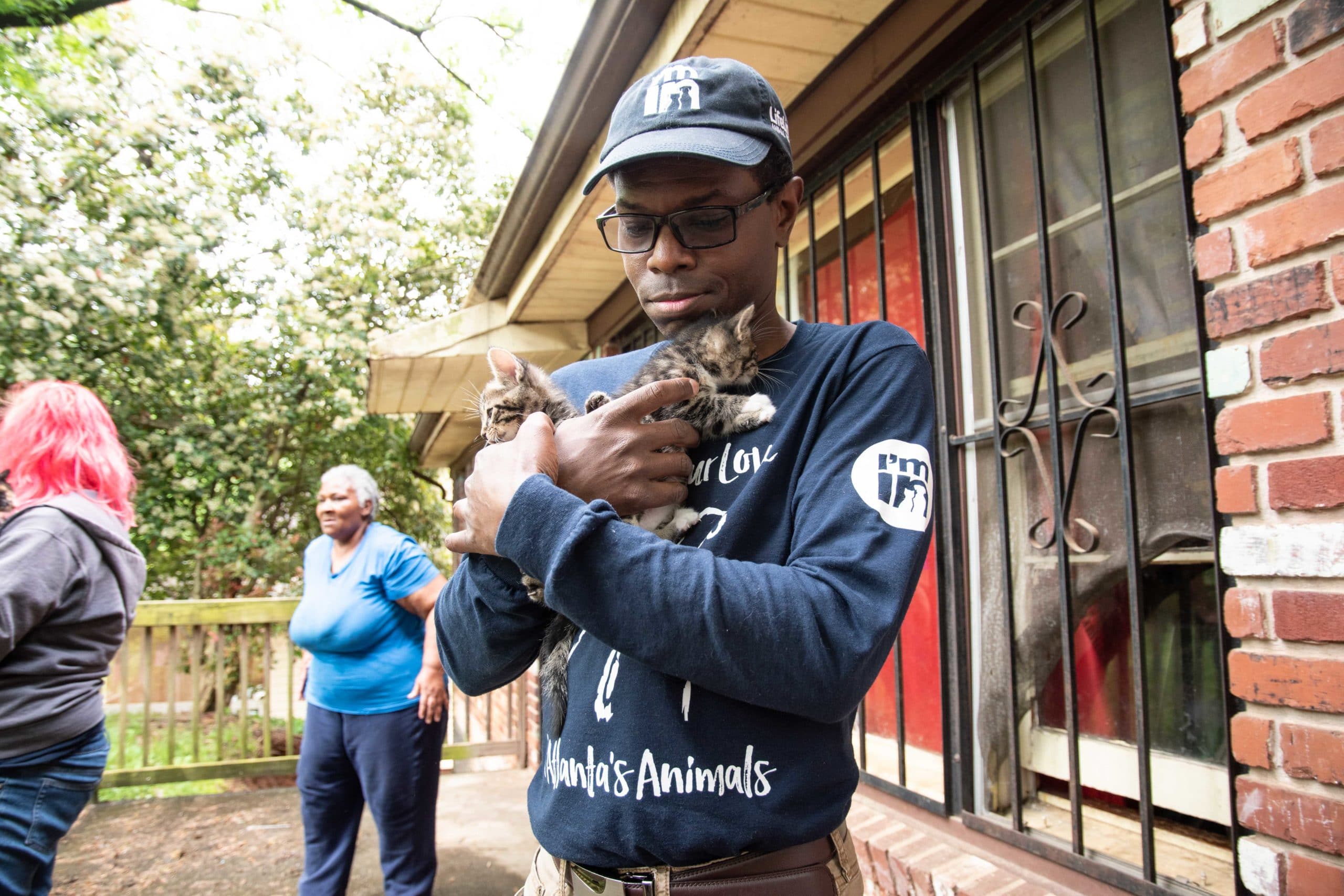 LifeLine Animal Project has been selected as one of 12 national shelters to be part of Human Animal Support Services (HASS), a new national coalition pilot program creating community-based solutions to animal sheltering and pet ownership and transforming the shelter system through innovative programs and services. HASS builds off of support that animal shelters experienced during the COVID-19 pandemic.

Organizations across the country, including LifeLine Animal Project, which manages Animal Services in Fulton and DeKalb Counties, were embraced by their communities who fostered pets, adopted, helped lost or found animals get back to their homes and identified new resources to keep people and their pets together.

HASS pilot centers will provide a range of services and solutions to support their communities. These include remote services like veterinary telehealth and text support, lost animal return-to-owner initiatives, foster care programs, behavioral and training services, and much more.

“We are honored to be part of this collaboration of innovative shelters to work toward an organizational model that has goals so closely aligned with our community vision,” says LifeLine CEO Rebecca Guinn. “I’m confident that this initiative will help pave the way for a new model of animal sheltering in the U.S.”

“We’re bringing thought leaders and experts in fields like human social work and public health alongside animal welfare, researchers to create the community animal support centers of the future,” says Lisa LaFontaine, Chief Executive Officer of the Humane Rescue Alliance in Washington, DC and a member of the HASS executive leadership team. “The impacts of COVID-19 have accelerated our efforts to modernize animal services and we now must dedicate the immediate energy of our movement to accomplish our urgent goal.”

With the state’s new directives that lift many of its previous restrictions and following Gwinnett County’s lead, the city has announced it will begin its 2020 event schedule in July. The events include a new event, a Night Market on Friday, July 10, followed by Flicks on the Green on July 11, Classic Sports on the Screen, July 18 and a live concert featuring Electric Avenue, a 1980’s pop tribute band, on July 25.

To ensure everyone’s safety, the city has incorporated some modifications: Six-foot social
distancing and face masks will be required.

The Night Market; held 6:30 – 9:30 p.m., features local farmers with fruits, vegetables,
gardeners with fresh flowers and herbs, and edible home goods from desserts and breads to
homemade sauces, jellies and soaps for sale. The booths will be spaced to ensure all attendees
are able to maintain social distancing while they shop.

For lawn events, such as those that feature watching movies and concerts, large white circles
will be painted on the Town Green’s grass for use by families and groups so all may enjoy their
time together while maintaining social distancing. The circles will accommodate family and
groups and will be spaced six feet apart.

After kicking off its inaugural event season in April 2019 which, by every measure, was a rousing
success, the anticipated 2020 season was delayed due to the state’s mandatory shelter-in-place
order that began in March. Some of the April, May and June events have been rescheduled for
later in the year.

The city is pleased to offer a number of favorites from last year including its big concert series
that features Electric Avenue, July 25; Texas Flood, Aug. 29; Drivin N Cryin, Sept. 26 and Marcy
Playground on Oct 17.

The city’s revised 2020 Calendar of Events is available here. It is also accessible on the city’s
website under the “Town Center Events” tab. Please check the city calendar regularly for
updated event information.

Source: Press Release from the City of Peachtree Corners

The largest community in Peachtree Corners boasts 717 homes and a stunning Swim and Tennis Club. With everything going on in the world right now, a strong sense of community has probably become the most important way to get through this. When all we have is to be at home surrounded by our neighbors, they have grown to become an extended part of our family.

Residents of the Peachtree Station community are longing for the days when they could gather for their many events at the Swim and Tennis Club, enjoy the pool on a hot summer’s day or catch up at Atlanta Bread Company. It won’t be long now, but for the time being, all they have is each other. And with neighbors like these, it’s easy to get through these difficult times.

A Place to Call Home

“Home” is the best word to describe this community, according to Judy Griggs, reminding us of modern-day Judy Garland. A Navy brat, she moved over 21 times before finally deciding there was no place like Peachtree Station. She and her family moved to the community in 1982 and haven’t moved again since.

Now Griggs is the president of the non-mandatory HOA which about 65% of the community belongs to. They service the entrances which now adorn the names of the 2020 class graduates, as well as host Spring or Halloween parties for the kids. They also provide “welcome baskets” to new residents.

Not only are the residents pampered from the moment they turn the key in the lock, but they also have the advantages of being part of a “COPS” neighborhood. Peachtree Station has a special partnership with the local authorities to keep an open line of communication and keep the neighborhood safe. They also have a “Block Captain” system where a volunteer from each block will look out for about 7-9 neighbors on their street.

“One of the things that makes Peachtree Station special is the civic leaders we have living in our community,” Griggs boasts. The residents are actively involved in the rezoning that has taken place in Peachtree Corners over the past 30 years, including the establishment of Simpsonwood Park.

Griggs recalls how the neighborhood was a construction zone when they moved in in the 80s, and that each cul-de-sac can be traced back to the community’s humble roots of belonging to the Medlock’s farm.

Growing with the Neighborhood
Weare Gratwick, who moved into Peachtree Station in the 90s, recalls a different scene moving in. “The neighborhood didn’t look much different than it does now, just shorter trees. But there was a mixture of folks who were original to the neighborhood, and transplants from other states.”

Gratwick had a 10-month-old when he moved into Peachtree Station, and he followed the clubs and organizations of his children all the way up to a City Council seat. First, he coached baseball in Chastain Park, and soon became heavily involved in Norcross baseball. He became President of the Norcross baseball league in 2003, as well as serve as treasurer for the Soccer Club.

By the time he became a part of the Peachtree Corners Civic Association, all of the kids he watched grow up were now the same adults who asked him to run for City Council. He recalls that even the teenager who babysat his children was now grown up and living in Peachtree Station herself.

Gratwick mused that since the Great Recession, it became cheaper for residents to keep their homes in Peachtree Station rather than downsizing once they had an empty nest. “We now know several families in the community who all moved in to be with each other rather than leave.”

Swim and Tennis Club
But the real gem of Peachtree Station is the Swim and Tennis Club. Savored only by the residents, it sits picturesque near one of the entrances of the community. Even though there are no children laughing and splashing in the water currently, Gratwick reminisced about memorable events like the Easter egg roll or Fourth of July parties that once filled the club with joyous laughter.

Even though the pool is empty, the residents can still be seen practicing their serve on one of the eight tennis courts located in Peachtree Station. Nancy couldn’t help but gush over the successes of their many tennis teams, or how any player can find a good place to practice no matter their level of proficiency.

One resident said she moved to the neighborhood specifically for their tennis program. “The program is even better now because of our awesome pros!  Because we have such a large neighborhood, we were able to field teams at all levels and not just lump players into a mid-level team. Our daughters have very fond memories of learning to play tennis, playing on the playground and swimming on the swim team.”
The family-oriented atmosphere is one that could not be matched. According to one resident, the athleticism from neighborhood tennis leagues are what contributes to making Peachtree Station so special.

“The tennis program is one of the best in the area with our great coaches on staff who are always planning clinics, plus team and individual lessons. This is a family-oriented, friendly, athletic neighborhood – I love seeing all ages out walking, running, riding bikes, pushing strollers, walking dogs and — most importantly – carrying their tennis bags to the courts!”

Neighbors and Friends
Peachtree Station is not only a community that loves their athletic programs, but they truly care about their fellow neighbors. One resident spoke of a troubling time in her life, and how the residents rallied around her in her time of need.

“I gave birth to twins several years ago. My mom came to help but she couldn’t stay long. I was completely overwhelmed trying to figure out how to take care of everything. My amazing neighbors set up a meal train for me and my family. Several days a week for several weeks, neighbors would bring a meal so I wouldn’t have to prepare dinner that day. It was a lifesaver and helped me get to know and love my neighbors even more!”

But the most remarkable thing of all about Peachtree Station is that instead leaving the nest after their families are grown, a lot of community residents simply choose to move other family members in instead. Community is so important at a time like this, and if the residents haven’t already moved their own families in, they simply transformed their current neighbors into their family instead. ■