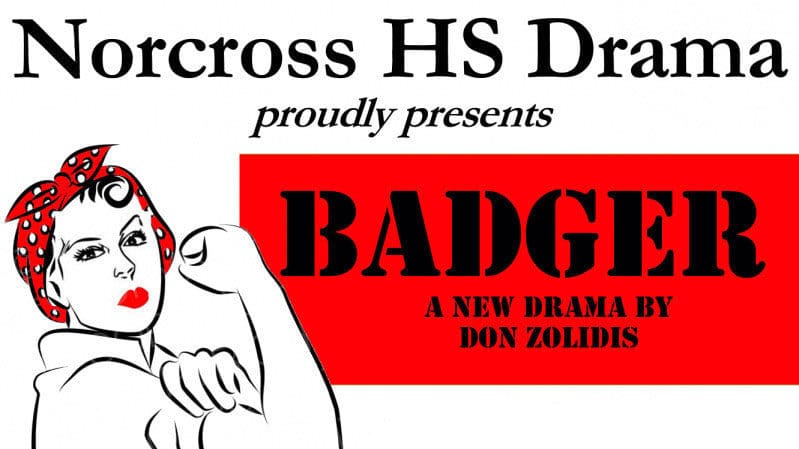 A new play by Don Zolidis about WOWs, Woman Ordnance Workers, will be staged by Norcross High School Drama in early October. BADGER centers around five young women in 1944. They take jobs at the Badger Ordnance Works in Wisconsin, one of the largest munition factories in the U.S. There, they encounter danger and sexism as they form unlikely friendships during the dark days of World War II.

The play will be presented Oct. 2, 3 and 5 at Norcross High School Auditorium, 5300 Spalding Drive, Norcross 30092. On Wednesday and Thursday, it begins at 7 p.m. On Saturday, the play starts at 1 p.m. Tickets, on sale now, are $7 for adults and $5 for students. Visit nhs-drama.com for details and a link to purchase tickets.

Live on the Green – Highbeams + UGA vs. Notre Dame 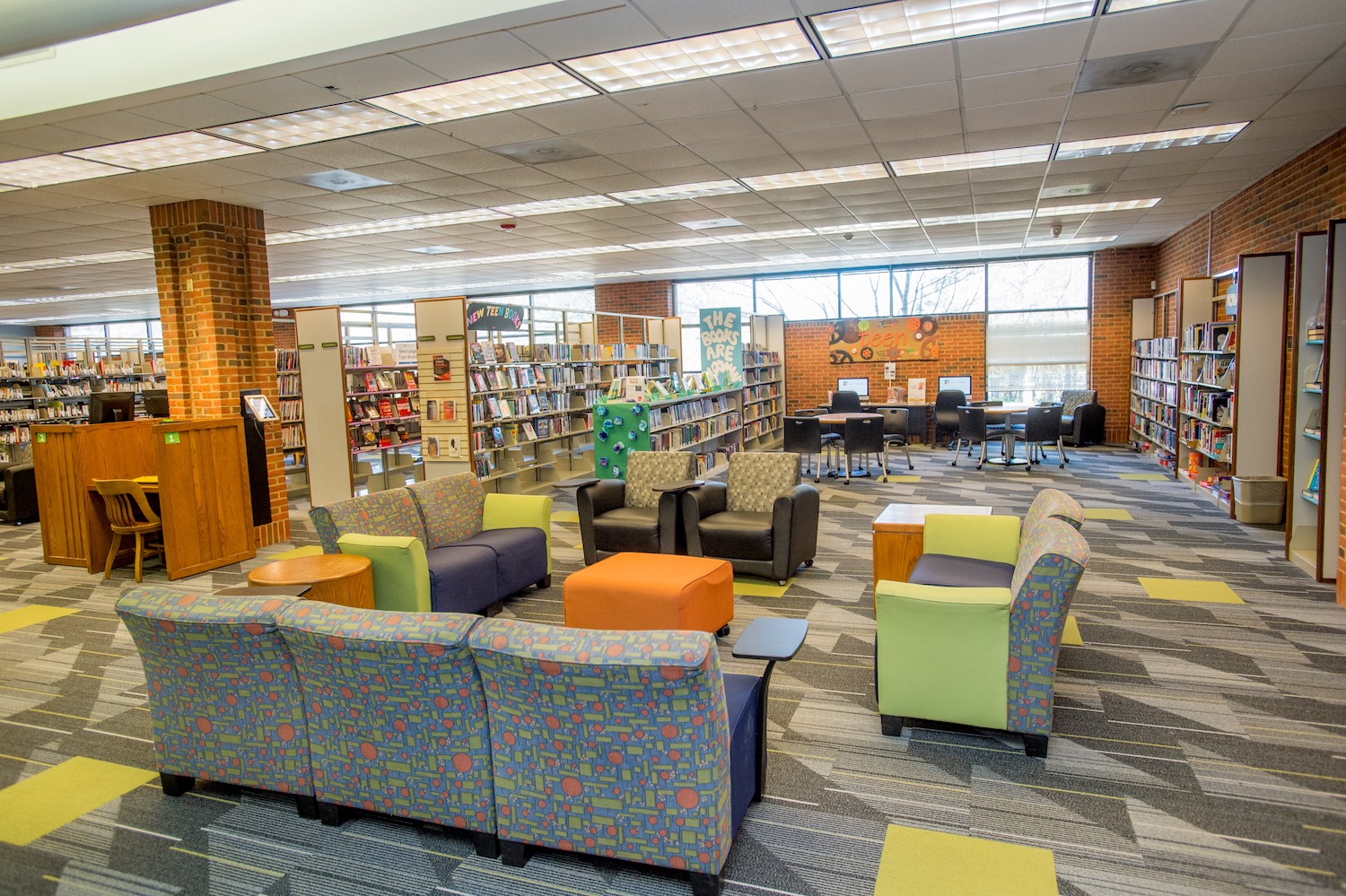 Library Branches in Gwinnett County reopened September 14 for computer use and browsing, so pick up the next great read. These are Early Fall 2020 Popular titles (Nonfiction and Fiction) listed from the Peachtree Corners Branch Library of the Gwinnett County Public Library system.

1.)  Educated: a Memoir by Tara Westover

2.) It’s Not Supposed to Be This Way: Finding Unexpected Strength when Disappointments Leave You Shattered by Lysa TerKeurst

3.) Before and after the book deal: a writer’s guide to finishing, publishing, promoting and surviving your first book by Courtney Maum

4.)  The Body: A Guide for Occupants by Bill Bryson

6.)  Never Eat Alone: and Other Secrets to success, one relationship at a time by Keith Ferrazzi

7.)  5 Conversations to Have with Your Son by Vicki Courtney

1.)  Where the Crawdad’s Sing by Delia Owens

4.)  Journey of the Pharaohs: a novel from the NUMA files by Clive Cussler

5.)  The Red Lotus: a Novel by Chris Bohjalian

6.)  The Alice Network by Kate Quinn

7.)  The Gown: A Novel of the Royal Wedding by Jennifer Robson

8.)  The Secrets We Kept by Lara Prescott

9.)  Circe: A Novel by Madeline Miller

10.)  The Dutch House by Ann Patchett

Thinking Outside the Branch: Librarians produce programs you can watch and join from home 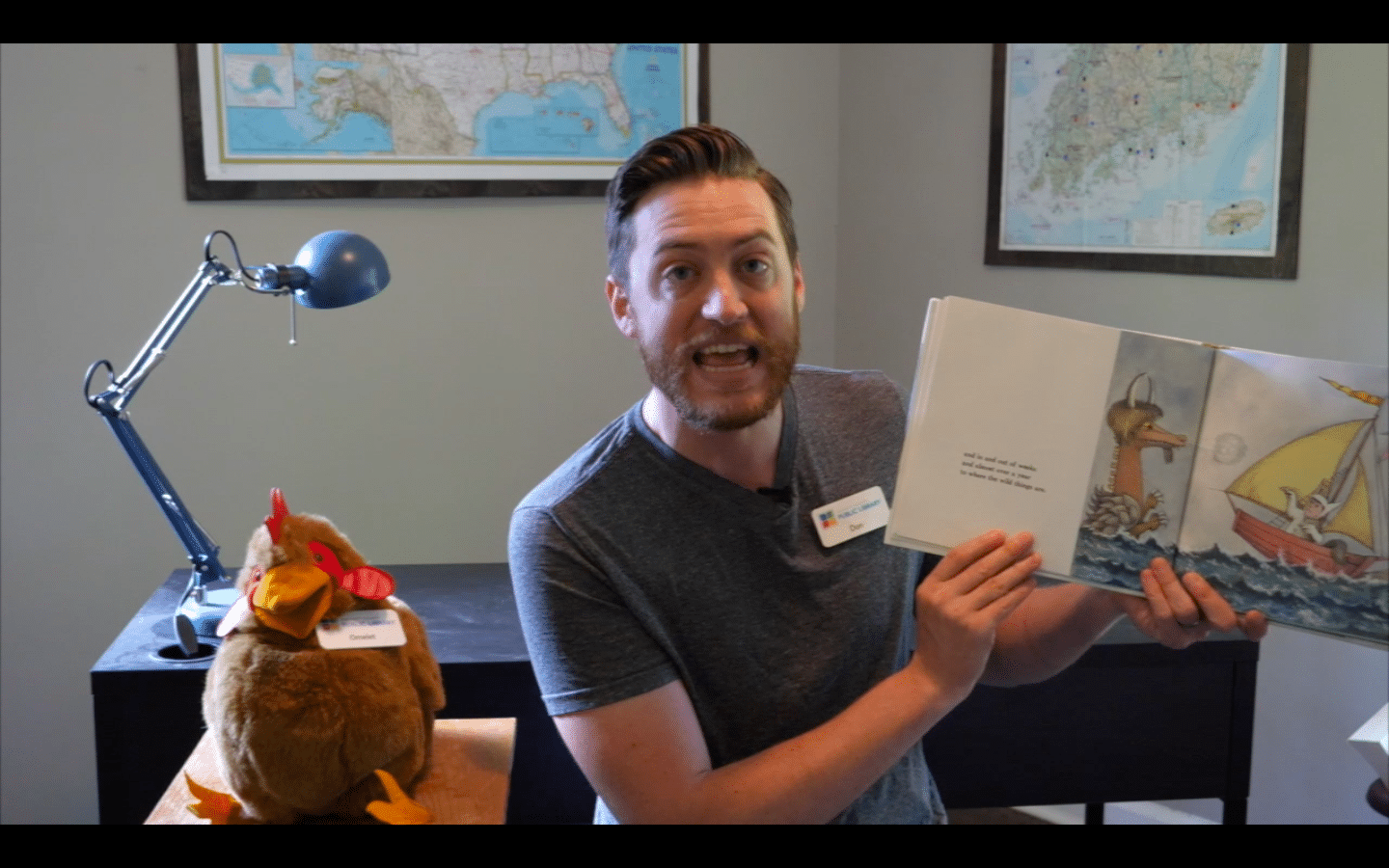 Librarian Becca Wamstad put herself through college by working as a Whole Foods baker. Today, her culinary skills are again being put to public use in a video series she calls “Baking with Becca.”

Produced in her kitchen, the show is one of hundreds of homegrown videos produced by Gwinnett County Public Library staffers since March.

After COVID-19 shut their doors, librarians could no longer offer programs at their physical locations. But that didn’t stop them from continuing to offer library programs.

Librarians from the central office to the frontlines at branches are producing programs ranging from “Backyard Biology” and “Virtual Sewing Club” for kids to “Genealogy: Trace Your Roots” and an “Intro to Python” coding class for adults.

Anyone, anywhere can watch the library’s videos on graphic design or a series on teas around the world. There’s a virtual summer camp for kids and a series based on the Juneteenth commemoration of the end of slavery in the U.S.

About 30 to 40 new programs for kids and adults are posted each week on YouTube, Facebook and Instagram and promoted on the library’s website, said Don Giacomini, a youth services specialist in the library system. Giacomini, who’s also the storyteller and puppeteer on the library’s “Storytime Takeout” variety show, praised the way library staffers have met the challenge of going virtual — from scrambling to master new technical skills to performing on camera.

“The stereotype of librarians is that we’re very introverted people, and, in a lot of cases, that is very true. I think nobody could have ever envisioned what we are doing now … but I think it is indicative of the role that libraries have played over the past 20 years in that we are stepping up to provide community services,” Giacomini said. “Our job has been to identify community needs and fill that gap.”

Guests can get a link to download a free copy of the book (or buy one) and then get a link to join a moderator a month later to talk about the book, said Denise Auger, who oversees adult programming for the system. Details can be found at gwinnettpl.org/virtual-book-club.

The library’s very popular Author & Speaker Series — which has attracted authors such as Pulitzer Prize-winning journalist Rick Bragg — drew 6,001 guests out to hear 44 authors and speakers in 2019, Auger said. Find videos of some of these recorded programs at gwinnettpl.org/adults/gcpl-virtual-author-speaker-series.

New programs in the series are being done virtually and live, allowing guests to use chat boxes to ask the authors questions. Attendance has soared. An online session in May with authors Mary Kay Andrews, Patti Henry and Mary Alice Monroe drew 4,081 virtual guests, Auger said. Visit gwinnettpl.org/authorspeaker for the schedule.

Check out the library’s YouTube channel to find many other programs for adults on topics such as gardening, cooking, starting a small business and help workshops for coronavirus-related job and landlord issues. (See info box for link.)

Wamstad’s “Baking with Becca” was the first video to come out of the branches, Giacomini said.

A Hamilton Mill branch staffer, Wamstad said she’s always loved doing programs in the library. But being filmed by her boyfriend for her first baking video was an entirely different story. “I never felt so nervous!” she said.

But she didn’t cave, and she has gone on from that episode about baking rosemary parmesan bread to other baking episodes on blueberry coffeecake and lemon tarts. A biscuits-from-scratch program is planned.

Wamstad has proposed other programs awaiting approval, such as a Halloween special effects makeup tutorial using products found around the house and a session on DIY natural body care products.

“I definitely love the fact that we are such a resource for the community, and even outside the community, because our programs are available for anyone to view,” Wamstad said.

Youth Services Specialist Jana King produces the bulk of the content for “Storytime Takeout,” which recently posted its 34th episode. One of the harder things she said she’s had to learn is how to engage a virtual audience.

“You don’t really think about what you look like when you’re (physically) reading a book to a group of children because you’re interacting with them and pointing out things,” King said.

But she’s forging ahead, and, among other things, she’s collaborating with her coworker
Sarah Martin to do a weeklong puppet camp for kids from July 27-31 that will be available online through the end of August. Find it by visiting classroom.google.com, hitting the + button, and entering the classroom code jp3dagl.

King encourages people to tell the library what they’d like to see in the way of programs. “We are brainstorming all the time about new content and new ways to get early literary skills out there to our kids and help them in this time,” she said.

Gwinnett library branches reopened briefly this summer but closed again effective July 23. All branches will offer only curbside holds pickup, except for the Duluth Branch which is closed until further notice.

“There is now substantial data to show Gwinnett’s COVID-19 fighting infrastructure is becoming strained,” the library said in a public announcement on its web page. “We also see rising numbers of customers visit the library without masks, exacerbating the potential for germ spread.”

Peachtree Corners Branch Manager Karen Harris said patrons who came in after they reopened told staff how much they’d missed them.

“My staff is so creative and so ingenious. We’re doing well,” she said at that time.

Ongoing branch programs are now online, including “Common Threads,” a large group of seniors who knit, crochet, embroider and quilt, and two writing programs — one for teens and one for adults.

Harris said other proposed virtual programs await approval. Among them are a senior singing program for all ages called “Virtual Senior Moments,” “Reading Rock Stars” for middle schoolers and “Fiber Arts Fridays” for all ages.

Other proposed virtual programs include a book club for adults, family game nights, a “Voting 101” program, and a session on “Fake News.” Find scheduled programming on the library’s website, gwinnettpl.org. 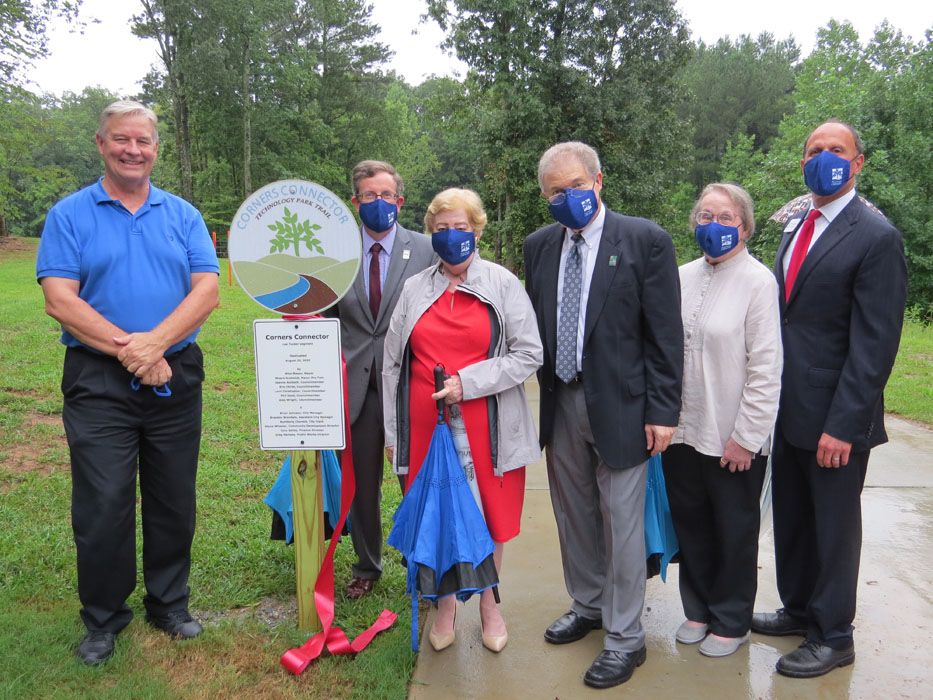 On Tuesday afternoon during a special presentation and ribbon-cutting event, the Mayor and Council celebrated the opening of a new section of its 11.5-mile multi-use trail system. They also announced the name selected for the trail — and unveiled the first of six sculptures to be placed throughout the city.

In the city’s name-the-trail contest “Corners Connector” was chosen for the name of the city-wide trail which will wind throughout the community connecting neighborhoods to parks, shops, restaurants and offices. Mr. Randy Gilbert, a long-time resident, selected the winning name chosen from over 150 entries.

Mr. Gilbert was on hand to help cut the ribbon on the new 1/3-mile section of the trail which runs around a portion of the 7-acre Technology Park Lake. This newest section has a plaque dedicated to Mr. Lee Tucker in recognition of his efforts in ensuring the city had the land needed for the trail expansion. Future plans will include the trail to encircle the entire lake.

“The trail is a great asset to Peachtree Corners and well worth the effort to build it,” said Mr. Gilbert. “I can see many people enjoying it in the years to come.”

In several in-person and online surveys, citizens ranked multi-use trails among the most desirable and valued community recreational assets. The city envisions that the Corners Connector will not only serve as an alternate means of travel but will also be a linear park offering unique amenities and programs for its residents.

“This is an exciting moment for our city,” said Mayor Mason during the event. “We hope our citizens, and those who work here in Tech Park, enjoy this new amenity. We look forward to celebrating each section of our “Corners Connector” trail as it is completed. We are also conducting feasibility study now to add a 3 ½- mile walking trail along Crooked Creek. We hope to have more news on that proposed section soon.”

The new button-shaped sculpture, which is located at the entrance to the lake-side trail section, is part of a Gwinnett-wide effort by a nonprofit organization, Button Art, to showcase the county. The city plans to install a total of six of the round-shaped Button Art sculptures, each depicting a theme based on the area of town in which it is located. Button Art, Inc. is a nonprofit created to further the love of art in Gwinnett County. The project was inspired by Button Gwinnett, the county’s namesake.

The city’s first sculpture features a friendly-looking robot walking a robotic dog, a nod to the many high-tech businesses located within Technology Park. Local artist, Lance Campbell has designed the artwork for the city’s six sculptures which are among 200 that will be sprinkled throughout the county.

Visit www.buttonart.org for more information on the Button Art project.