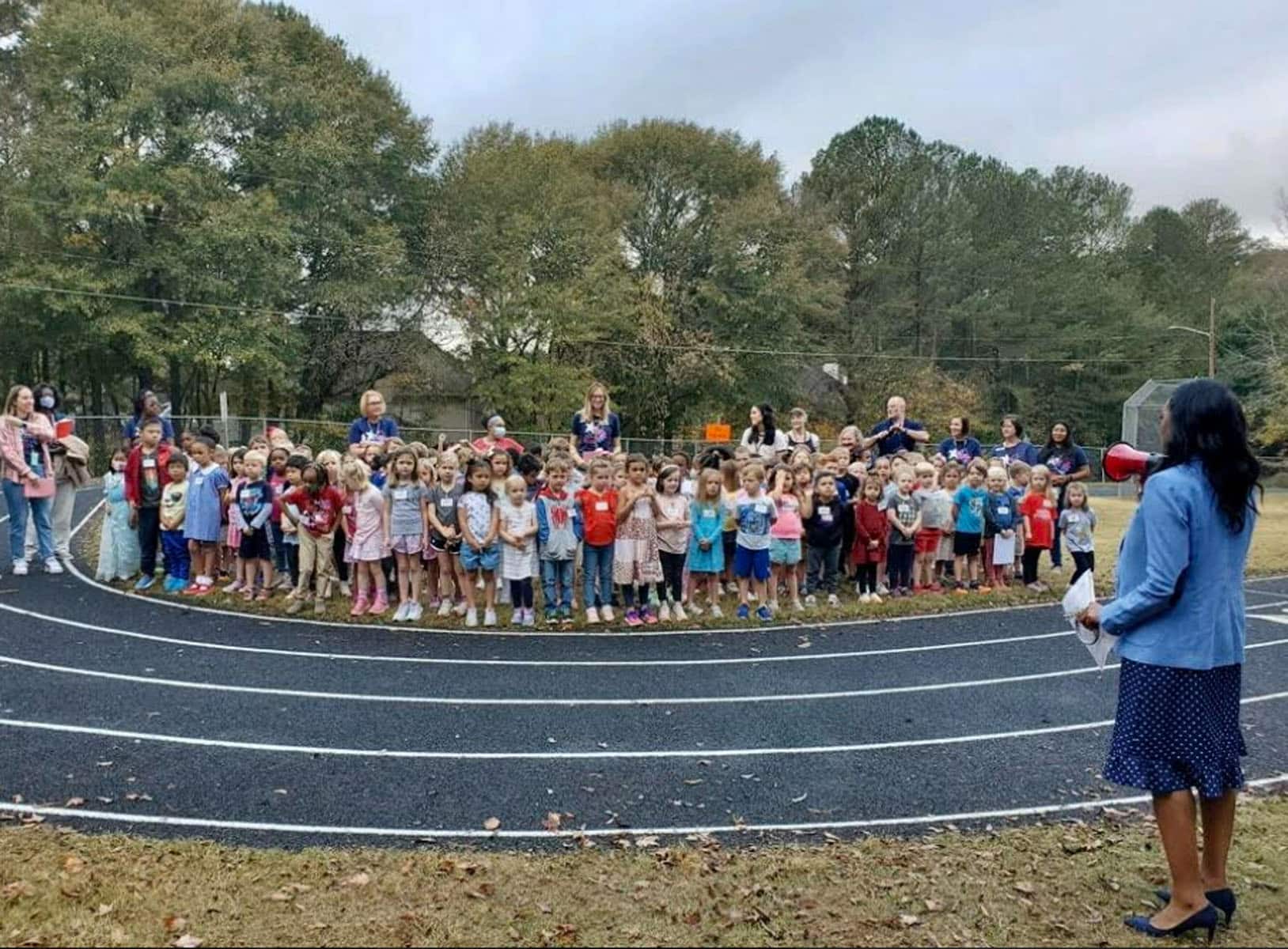 Students now have facilities suitable for exercising the body as well as the mind.

For something to be important and special, it doesn’t necessarily have to be huge. That’s what Simpson Elementary students, staff and Peachtree Corners officials realized on Nov. 7 with the ribbon cutting of the school’s new track.

“Today is a joyous occasion because we’re here to celebrate the renovation of our school’s playground,” said Simpson Elementary Principal Dr. Taffeta Connery.

The four-month long project took a lot of effort. In addition to trimming the overgrowth of trees beyond the fence surrounding the track and a playground area, numerous potholes needed to be filled. The playground was leveled with truckloads of dirt and gravel, and the actual track was rubber striped.

What was once a potential hazard and mini wetland has been transformed into an inviting recreational space for students and staff to exercise. For safety reasons, the track isn’t open to the public.

“Not only is it attractive, but it’s also safe and enjoyable for all of you to run around and play,” said Dr. Connery.

Previously, the Simpson Superstars had to meet for Kilometer Club at the nearby YMCA. The renovated space now allows for a closer option right on school grounds.

The officials received a beautiful bouquet of flowers and an abundance of thank you cards from the kindergarten class of the school before officially declaring the track open for walking, running and just enjoying the outdoors.

The kindergarteners gathered for the ceremony and applauded the efforts of the city as Dr. Connery presented Peachtree Corners with a plaque and flowers as tokens of appreciation.

The students presented the thank you cards they’d made to city officials before everyone took a victory lap to break in the new track. The weather was a little warm for early November, but everyone agreed that it was perfect for a mid-morning stroll.

Simpson Elementary PTA Co-Presidents Mary Catherine Jennings and Dana Zamuel were also present to celebrate the school’s new addition. They both agreed that exercising the body is just as important as exercising the mind — especially with energetic elementary students.

The teachers are just as excited about the improvements as the children. Prior to the renovations, that area had such poor drainage that it often couldn’t be used for recess, nature walks or other school functions. 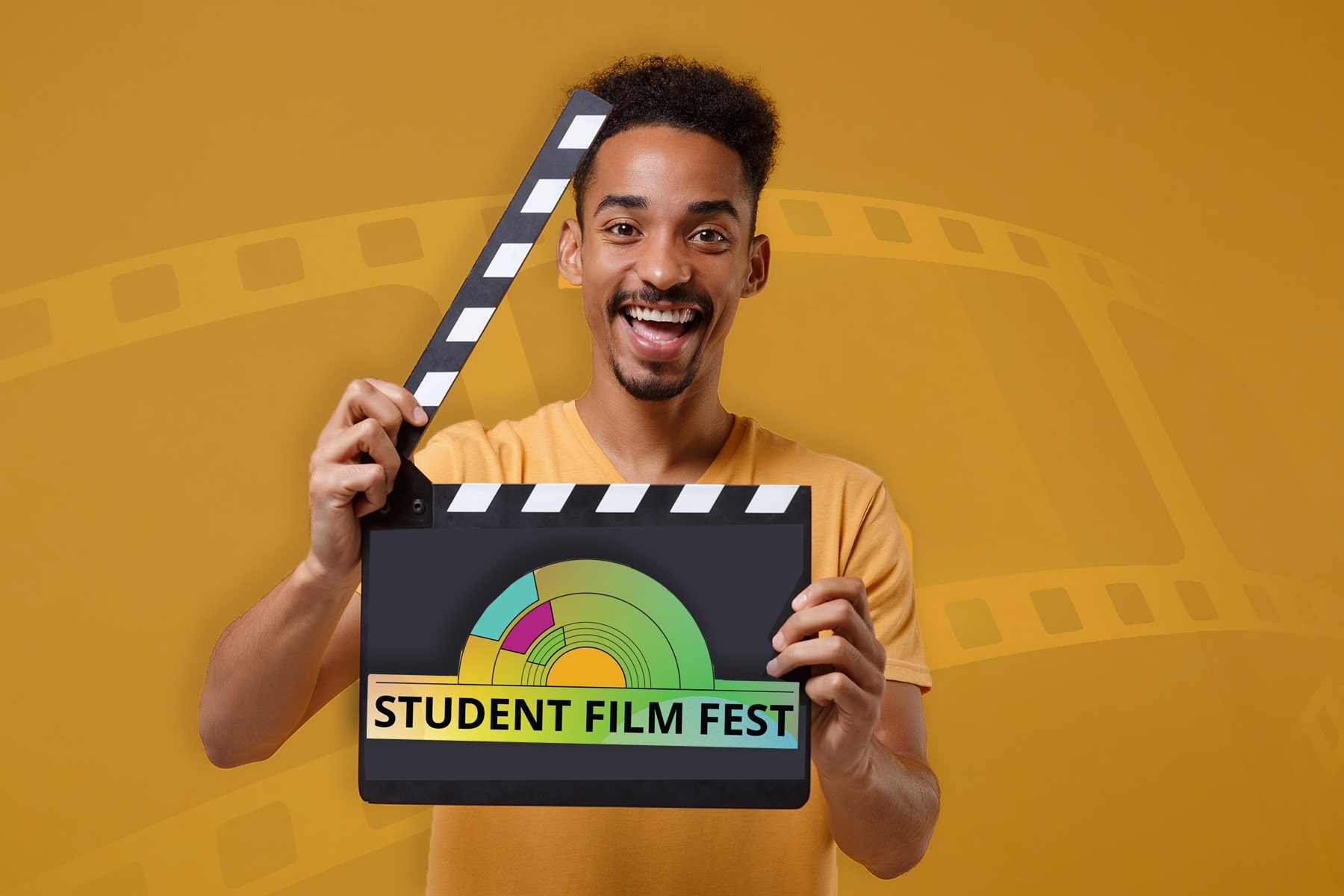 When it comes to bonding and quality time among students, nothing proves more effective than a premium film fest. In light of this, Gwinnett County Public Library has taken this initiative down in its playbook by presenting the first annual Student Film Fest for the 2022-2023 school year.

According to the GCPL media alert, the festival will be held on March 11th, 2023, and it promises to showcase a lot of film screenings, an award ceremony, and an after-party with possible networking benefits, especially for young filmmakers.

Everyone in and outside the county was pretty excited about the news, more so when the video and film production company and media group, East2West, was announced to be the major sponsor for the program. This news, coupled with the fact that cash prizes and awards would be in abundance at the festival, has kept students and spectators on their toes as they wait for the day of the film fest in unbridled anticipation.

Subsequently, invitations were spread worldwide to students around the age of 11 and above from every grade in middle school, high school, and higher education. For a landmark project, the Gwinnett County Public Library might just make this Student Film Fest the best of its kind yet.

Following the announcement of this film fest, calls were made to students from reputable institutions around the world to submit films of any genre. These films will be arranged into their respective categories, and winners in each category will receive awards and cash prizes. Submissions will open on November 1st, 2022, and close on January 22nd, 2023.

For a much wider reach, the GCPL decided to include other members of the public by demanding a representative from each student group who would attend the awards ceremony. This would form an eligibility clause for students seeking to win prizes.

But the directives did not stop there as the GCPL proceeded to outline several rules of conduct for the Film Fest. Here are excerpts of these rules:

For some semblance of order to take place throughout the Student Film Fest, it was paramount that these regulations be implemented thoroughly.

As for the prizes, GCPL stated that only the winners of the Best Picture award in each category would win $250. Trophies and certificates will be awarded to other winners, and the GCPL’s Learning Labs team will provide access to library resources for young filmmakers.

Additional information can be found at the library’s website. 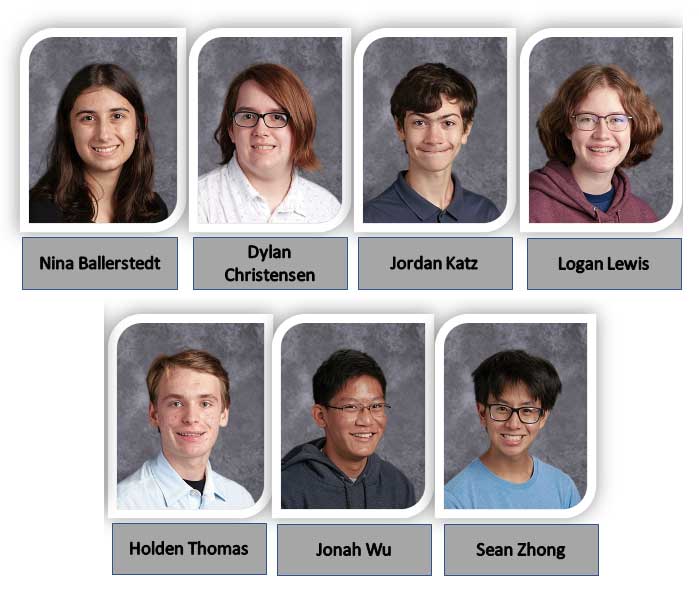 To be accepted into GISA’s Master Teacher program, candidates must submit a detailed application.

Applicants must also submit a portfolio of three tangible examples of outstanding work related to the classroom and to sharing and collaborating with other educators. The final part of the application is an unedited video of the candidate’s classroom teaching utilizing best practices and five letters of recommendation from colleagues, administrators, parents, and students.

“We are delighted that GISA has acknowledged the hard work of these committed educators throughthe Master Teacher program,” said Chris Cleveland, Wesleyan Head of School. “Laura, Ruthie, Pam, andTed are outstanding classroom teachers and have been impacting the lives of Wesleyan students formany years. They are each deserving of this honor.”